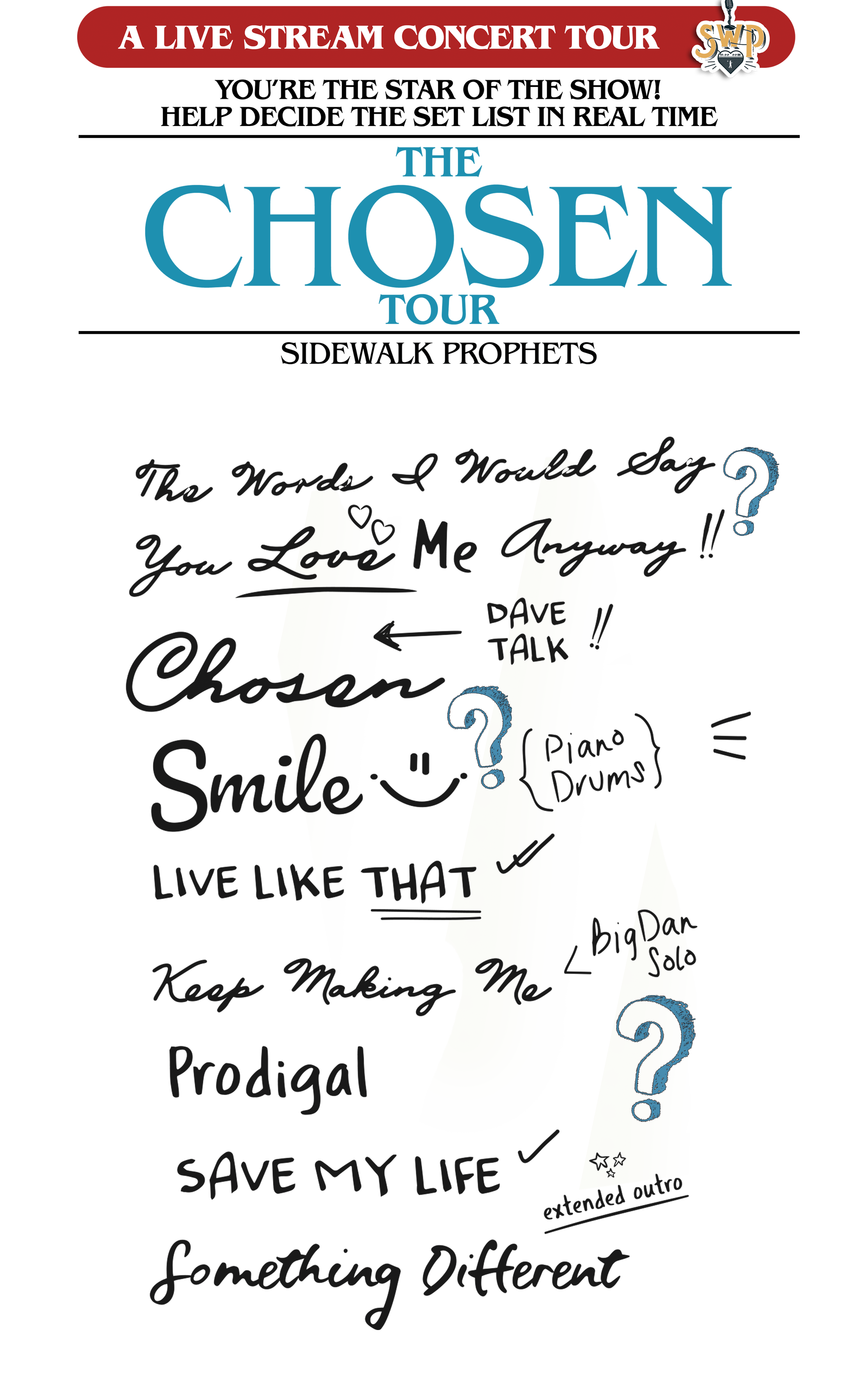 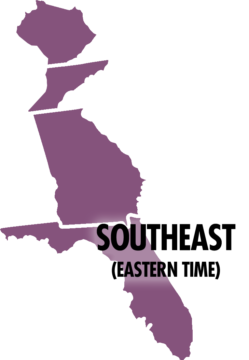 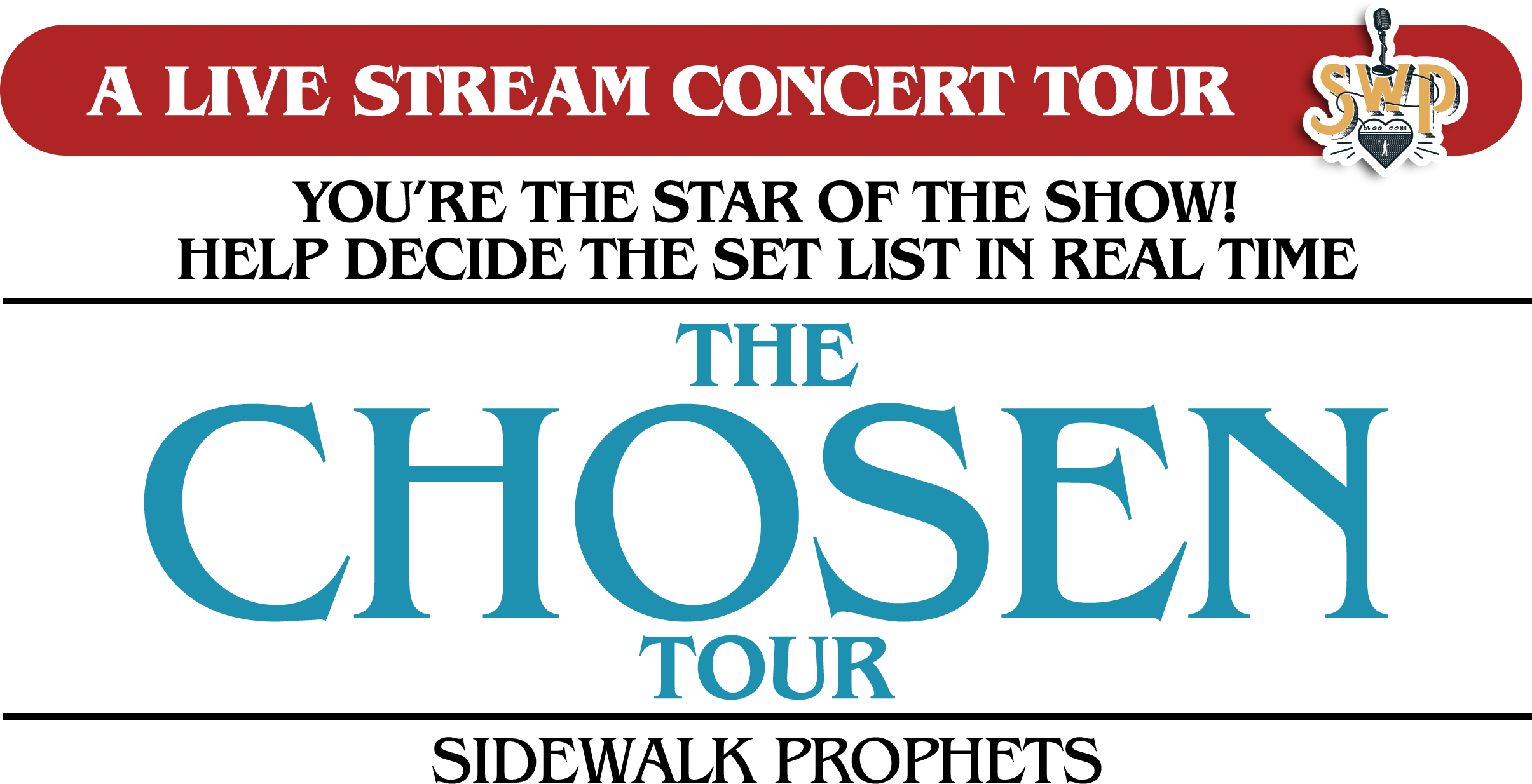 Before you claim your ticket, please read.

We've been working hard to create a very special live stream experience...just for you.  Please see some important details below.

Free Tickets:
We want to make these shows affordable for everyone, so we've implemented a "pay what you can" ticket system. This system does include a FREE ticket option which we are happy to offer.  Please keep in mind, that if you can afford to pay for tickets, we encourage you to do so.  Our crew, band, and families appreciate your support during this difficult time.

What Are Region Based Shows?
We've divided the live stream tour dates into geographic regions.  All shows begin 7pm local time to that region. Don't miss the "Great Big Family Gathering" Pre-show which begins at approximately 6:30pm local time before each show.

How Can You Support?
Most importantly, your prayers are appreciated!  For financial support, keep supporting us the way you always have.
1) Buy Tickets To Shows
2) Purchase Merchandise
3) Donate

Experience a live stream concert like never before. Help Decide The Outcome Of The Show!

You choose the set list! Vote on songs in real time throughout the night. Want the band to play Come To The Table? Or maybe The Words I Would Say or Smile? How about all three—and more! Your active involvement directs what happens during the show. 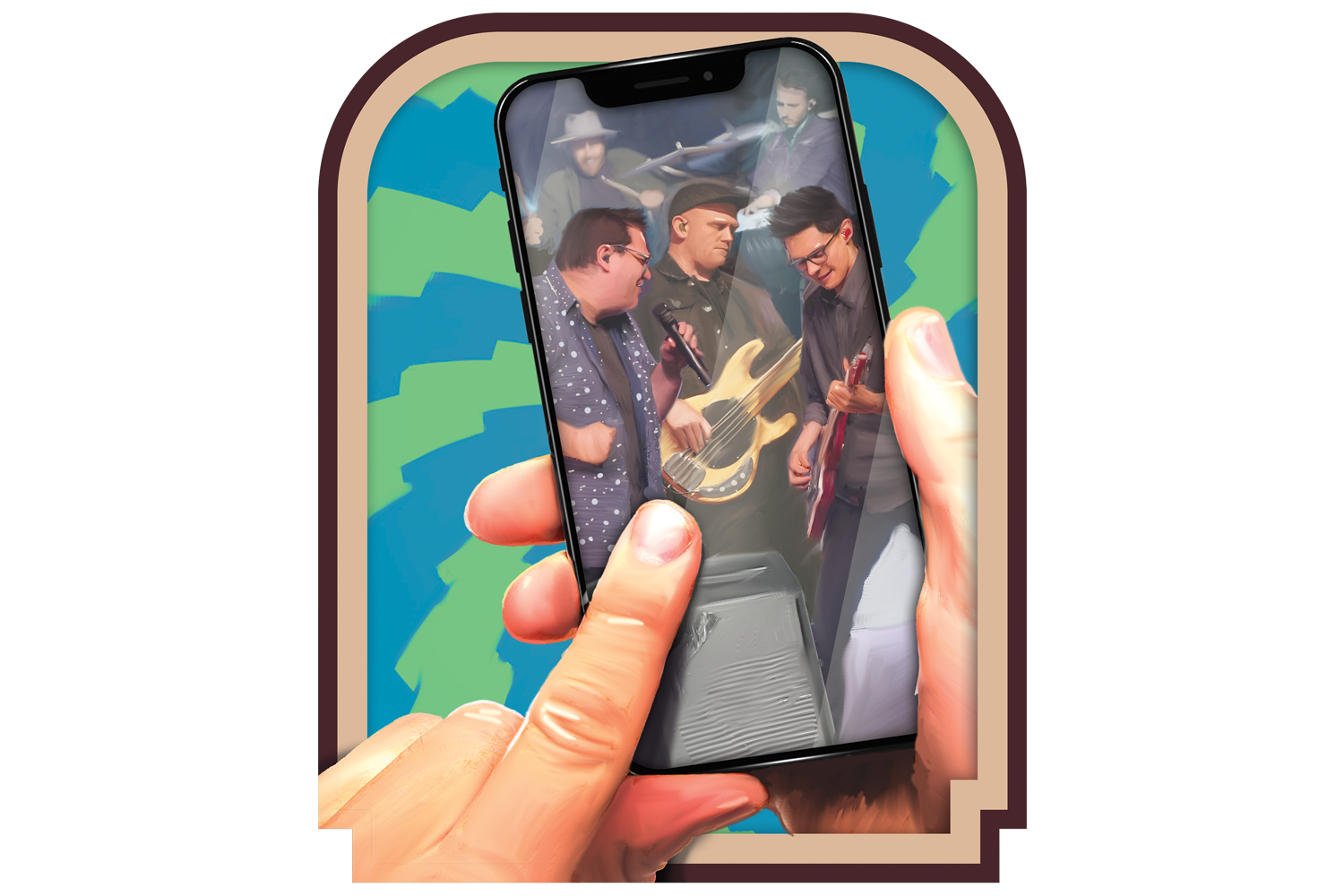 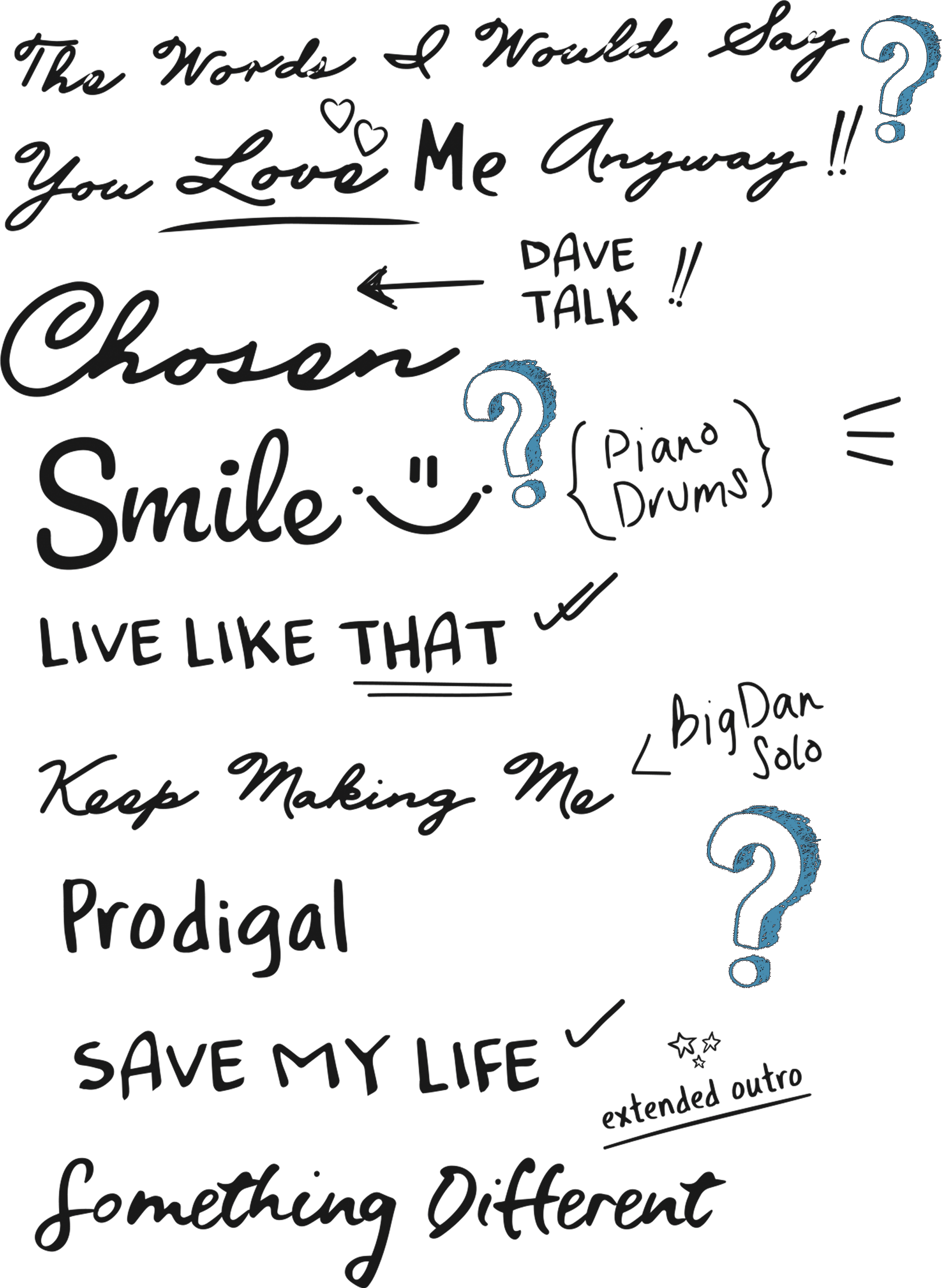 Your ticket to this unique tour experience includes:

*The quality of your video feed is largely dependent on the speed of your internet service provider.

*The quality of your video feed is largely dependent on the speed of your internet service provider.

What Makes Our Live Streams So Special?

Our team works hard to create a very personal live stream experience.  Our events are NOT pre-recorded.  Each show happens live, and each night is different from the next. This also means you get an authentic real time experience.

We actively work on creative ways that we can involve the audience in the shows.  Some examples of this might be: conferencing fans into the live stream, letting fans vote on what happens during the show in real time, sending special surprises or gifts to fans, and more.

This isn't just a band in their living room on a single microphone.  These are highly produced, high definition concerts, with superb audio quality!

*Please note that the quality of the live stream can vary based on your internet service speed.  We will do everything on our end to make sure we're sending out the highest quality product available.  If the quality of the show is important to you, please be sure you have the best internet connection possible.

Tell Me About Free Tickets / Pay What You Can System

We want to make these live stream concerts as affordable as possible.  That is why we've created the "Pay What You Can System".  This system allows you to pay what you can afford to watch a show.  We do offer a free option, and are happy to do so.  Please keep in mind, that if you can afford to purchase a ticket, you should do so.  Putting on these shows costs our team lots of time, and money- and we depend on paid ticket sales, merchandise sales, and donations to keep our team provided for.

How Do I Watch The Live Stream?

Once you have registered for tickets, you will be redirected to the official streaming page.  Bookmark that page, and set yourself a phone reminder of the date/time for your live stream concert.  We'll also send out a series of e-mail reminders prior to the show.  Be sure to check your junk email folder if you are within 48 hours of your show time, and have not seen an email update.

What Region Am I In?

We have divided the country into 12 different regions.  We try to make each show as localized, and intimate as possible.  Below is a list of the regions, and the locations they include:

Can I Go To A Show That Is Out Of My Region?

Yes, you can.  Choose the show that is most convenient for you.

I Don't Live In The USA, Can I Still Be A Part Of A Concert?

Yes, in most cases (as long as your country supports Vimeo/Livestream) We can get you access to one of our shows.  Please email events@greatbigfamilyproductions.com if you'd like to be a part!

How Can I Become A VIP?

VIP ticket holders will have access to our fan favorite "VIP Pre-show Party". Hang out the the band (virtually), partake in a Q/A, play games, and have the most fun ever.  Once you've gone to the ticket page, just select "VIP Preshow" Ticket option.  We can't wait to see you there!

What Devices Can I Watch This Live Stream On?

Currently the live streams can be viewed on: Laptops, Cell Phones, Tablets, and select Smart TVs.  For Smart TVs, the most effective way to watch the show is a "mirroring" from another device.

For "The Chosen Tour" you will be able to vote on the set list in real time.  Voting requires that you are logged onto a laptop, tablet, or cell phone and are logged into the chat box (make sure that you've clicked the "toggle chat on/off" button to the "on" setting.

Since May of 2020, we've been creating unique virtual tour experiences.  Recently, we began moving in to our own studio just south of Nashville, TN.  This studio is aptly named "Great Big Family Studios".  This location, is fully customized to deliver high definition video/audio content around the globe.

All virtual tour dates are broadcast live from the Great Big Family Studios, and then broadcast to specific cities, or regions.  Choose the region that works best for you, and check out a show!

Our team is a very small team, that are passionate about faith, people, and experiences.

How Can I Support Sidewalk Prophets?

Thank you for your interest in supporting Sidewalk Prophets.  Below are a list of ways you can help support the band:

I Have A Question That Isn't Listed.

Please email events@greatbigfamilyproductions.com We will get you an answer as quickly as possible.

GET TICKETS PAY WHAT YOU CAN

Check out our latest album

“THE THINGS THAT GOT US HERE”

* We’ve created radius checker to ensure that the tickets for each location are going to those who live in those specific areas. If you live outside of the radius, you will be given the option to purchase an out-of-radius pass.